Warner Sallman’s well-known yet lesser-known paintings have sold 500 million copies altogether. The Chicago native’s most famous painting, Head of Christ, has sold that number on its own. In only a few years it became an iconic image of Jesus around the world. 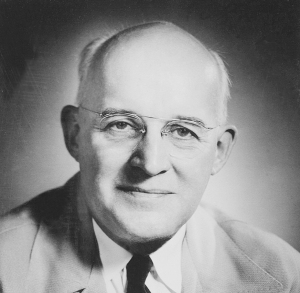 When he was four, Warner discovered a copy of The Bible Illustrated, with paint-ings by Gustave Dore. He poured over the dramatic illustrations, soaking in their ability to capture a Bible story at a certain moment. He would later credit those illustrations as the strongest influence in his life for both his artistic pursuit and his concept of God.

Other religious art forms also affected him. The stained glass windows in the Methodist church his family attended captured his imagination. Especially one depicting Jesus praying in Gethsemane. The church handed out floral picture cards that sparked a desire in Warner to some day paint that well.

Warner’s father, Elias, also inspired him. Elias had a small studio in his home. He render-ed watercolor and oil versions of outdoor scenery. As a youth, Warner made some early attempts at using watercolor.

In 1905, Warner enrolled in evening lessons at the Art institute of Chicago. So it began, not only his love for art, but professional training to sharpen his abilities.

The experience that truly determined Warner’s future direction happened in 1908. The sixteen-year-old attended revival services at a local church. When the evangelist gave the altar call, Warner responded. Citing that decision, he said, “Since that time my life has been based on that experience, and has been directed toward serving God in every way.” 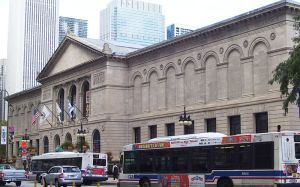 Chicago’s Art Institute. Image by Beyond My Ken.

Warner concluded his formal education after the eighth grade. Over the next few years, he continued taking night classes at the art institute. He also held various jobs that paved the way for his future.

The year 1918 proved pivotal. Warner married Ruth Anderson and began accepting painting assignments from the Mission Covenant Church. He had officially launched his career as an illustrator of religious art. Some of his works depicted scenes from the Bible while others showed modern scenes of religious devotion.

Warner’s most famous work began as a charcoal sketch of Jesus’ face. He drew it for a cover of his denomination’s magazine, The Covenant Companion. He titled the 1924 sketch The Son of Man. Something about the image caught people’s attention.

Demand for the picture led an engraver to print an additional 1,000 copies of it. In 1933, the Salvation Army used it its magazine. A print of it hung in the Hall of Religion at the 1933-1934 Chicago World’s Fair. The image in charcoal also became part of a campaign promoting Bible reading by combining religious works of art and scripture on posters displayed on buses and streetcars. 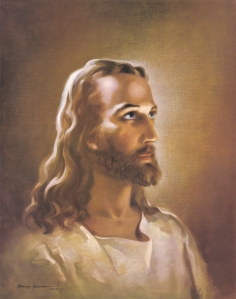 Then in 1940, Warner recreated the image as an oil painting. When business partners Fred Bates and Anthony Kriebel saw the finished product, they had a plan. They offered Warner a contract to reproduce his painting in various sizes for distribution. They would target denominational publishing houses and other religious market outlets.

The charcoal version had become popular by giving hope to many struggling during the Great Depress-ion. The new oil painting version, titled Head of  Christ, inspired fresh faith to endure World War II. Its status as religious art would become iconic.

Here’s how Warner described what he felt was his purpose in life: “I believe the Lord has given me a job to do—of pointing people to Christ through the medium of art.”

In 1941, one million prints of Head of Christ sold. In 1942, an additional three million were purchased. Thousands of copies were given away. The YMCA and the Salvation Army, through the USO, gave pocket-sized copies to soldiers being deployed to Asia and Europe. During the war, the calming image of Jesus showed up in military chapels and hospitals (often in every room). Other religious organizations joined the effort.

At church, the picture on a wall would greet church-goers who might be wearing Head of Christ buttons. They might also be carrying the image on a bookmark, on the cover of a devotional book, or as a page inserted in their Bible.

In homes, the wallet-sized print or the image on a key chain could be found in pockets and purses. It hung on walls as both framed prints and calendars. The picture could also be seen sitting on a table on either a puzzle or a clock. In businesses, the picture adorned the walls of banks and other offices. 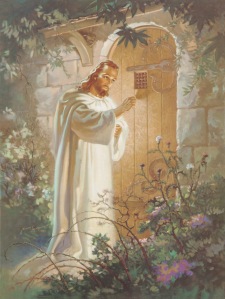 Warner agreed to do other oil paintings for Bates and Kriebel. His most well-known are from the early 1940s. In that period he produced Christ in Gethsemane, Christ at Heart’s Door, and The Lord is My Shepherd.

It didn’t take long for testimonies to circulate of how the paintings influenced people. Seeing the Head of Christ on a wall in one business stopped customers from swearing. In other locations, it improved general business etiquette, helped repair fractured marriages, and softened tough hearts. Often, it brought a calming effect to those lacking peace.

Seeing Christ at Heart’s Door, which is based on Revelation 3:20, “Behold I stand at the door and knock,” has evoked the need to open the door of one’s life and invite Jesus in. 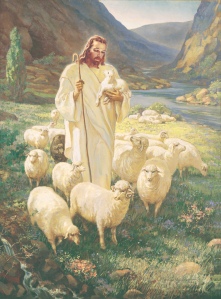 The Lord is My Shepherd. © Warner Press, Inc., Anderson, Indiana. Used with permission.

Seeing The Lord is My Shepherd, the viewer may sense the security of the sheep in Jesus’ arm and dwell on the assurance of His help for every need, as David described in the 23rd Psalm.

Warner did paintings for specific places, including individual churches and hospitals. For instance, in 1958, he painted The Great Physician for Iowa Methodist Medical Center in Des Moines (Jesus healing the man whose friends lowered him through the roof). It now covers a wall of the hospital chapel.

It was always a crowd pleaser when Warner did chalk talks. He often sketched Head of Christ to live back–ground music. He would then give the picture away to someone in the group. Warner layed down his chalk, pens, and brushes for the final time in 1968 when he died of a heart attack.

Words the artist once spoke can be an inspiration to all of us: “With Jesus Christ as my guide it has been my goal to yield whatever abilities God has given me to His honor and glory.”

I'm married to a wonderful woman named Deb. We're the parents of a son and daughter who bring great joy to our lives. I currently pastor the Assembly of God church in Afton, Iowa.
View all posts by William E. Richardson →
This entry was posted in Uncategorized. Bookmark the permalink.